A retailer’s first green building is gold — a golden idea for the company treasury, the environment and the retailer’s image, which it works so hard to cultivate. When striving for energy efficiency and improving profitability, the standard has to be set from the top. In third quarter 2010, Office Depot’s Boca Raton, Florida, global headquarters was awarded LEED Gold Certification by the U.S. Green Building Council under its “Existing Buildings: Operations and Maintenance” rating system.

“Our motto here is buy green, be green and sell green,” says Ed Costa, vice president of construction for Office Depot. “It’s part of our culture.”

The certification was not only a major achievement for the nearly 1,200-store provider of office products and services; the company also became the first retailer of its kind with a headquarters building certified under any of the LEED rating systems.

But certifying the company’s headquarters was nothing new for Office Depot, which started its green construction journey nearly 5 years ago. After a few years of utilizing innovative and more efficient initiatives and practices, Office Depot opened its first Gold-rated LEED certified retail store in 2008.

“We just took a stab at it,” recalls Costa. “We actually went in just looking to get certified, and we ended up having a Gold building.”

Office Depot opened that first LEED-Gold certified store, an adaptive reuse of an old post office, in Austin in summer 2008. Among its many benefits, the property lowers carbon emissions by 23% and is about 15% more energy-efficient than other store locations in the market. In early 2010, the retailer announced plans to only open LEED for Commercial Interior-certified stores, with the first bricks-and-mortar evidence of that large sustainability initiative having opened in July 2010, coincidentally also in Austin. A total of 14 stores planned for 2010 were scheduled for the LEED-CI certification program. 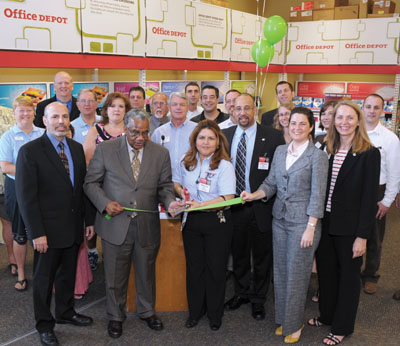 “Anything from changing lighting to installing energy management systems, the construction team was interested in decreasing the environmental footprint of our stores, but also saving money at the same time,” she says. “Because the construction team holds such a leadership role for the entire company, all other divisions of the company are kind of pushing it to see what [sustainable steps] they can do within their own areas. For example, back in 2008, the transportation team was looking at our fleet of vehicles, and changed a number of big box trucks to Sprinter vehicles, which are 35% more fuel-efficient.”

Costa says that Office Depot will relocate 18 stores and open approximately 22 more this year. The retailer’s big focus in 2011, however, is implementing a 3-year store-remodeling program.

“It’s really a refresh,” he says. “It’s trying to get to a more consistent format. Right now our stores are broken into a bigger classification we’ve been calling M2 and other stores we call more traditional. What we’re trying to do is bring them all into the M2 format. That’s the plan over the next several years.”

Office Depot’s store maintenance department falls under the construction umbrella. The director of construction, Jon Bauman, who reports to Costa, has a dispatcher that works with a group in charge of vendor or category management. The vast majority of Office Depot’s vendors are national, with the smallest ones most likely falling into the regional category.

“When I first got here, the maintenance department probably had 4,000 vendors,” says Costa, who’s been with the retailer almost 8 years. “Now we’re probably down to less than 500.”

Office Depot’s procurement department assists in identifying vendors, handling all of the bidding/contracts. Typically, the team bids out 100% of the required maintenance work. 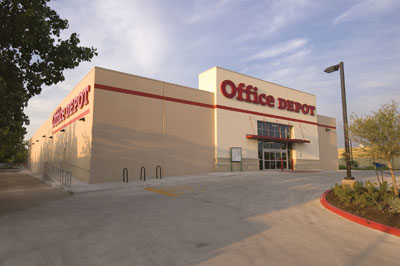 “We have to use Ariba for our procurement for our e-auction system, and Ariba has a great tool where you get to post ‘I need vendors that do this type of work.’ Over the course of the past several months, we’ve been working with procurement and we e-auctioned 10 of the 12 disciplines we have in maintenance. We auctioned everything: all the janitorial, all the air conditioning, all of the handyman services, all the plumbing. We found companies that dip their toe in different parts of the business; for example, they’ll do janitorial and also some handyman work. So that gave them a bigger piece of the pie, so they could leverage their costs a little bit better, too.”

Office Depot does glean from vendors the “latest and greatest” in sustainable maintenance practices, but the global retailer maintains its proactive approach on that front as well. A LEED Accredited Professional, Prototype Manager Wade Rose works with the vendor group to go out and find new and innovative measures with which to ensure Office Depot stores stay the cleanest and greenest.

“Having a good relationship with those vendors, they do bring a lot of good ideas to you,” Costa says. “But the other side of it is, you’ve got to be open to those ideas. You’ve got to be willing to want to try new things. When you do start to show some innovation that you want to implement some different things in your stores, it kind of opens the floodgates. Change is good, but change is also difficult.”

Following the big sustainable news regarding Office Depot’s plans for LEED-CI certified stores and its South Florida headquarters being LEED certified in August of 2010, Costa has tasked Rose “on top of 400 other things” with evaluating whether or not a LEED-EB program will work in the retailer’s stores during the upcoming 3-year remodeling initiative.

“[Environmental responsibility] has become an important part of the business,” Costa says. “For one thing, if a company doesn’t become more efficient and do a better job of increasing profits, it’ll disappear. You’ve got to come up with any way you can to try to drive that profitability. That’s a nice thing; at least in the construction industry, lots of the benefits of that also help the environment — it goes hand in hand. We’re kind of lucky in that sense.” 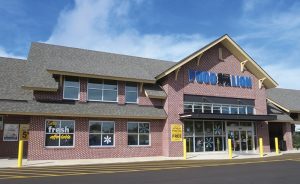