Glasgow, UK — German Doner Kebab has appointed Mark Treptow as its new franchise director for the USA and Canada as the brand builds on its ambitious international growth plans. He joins the growing restaurant from Fransmart.

Treptow is the former senior director of development at Fransmart, where he was responsible for the franchise expansion of high-performing brands such as Five Guys Burgers, Qdoba, The Halal Guys and Freshii.

Treptow has over 25 years of sales experience in franchise development and financial services and has been instrumental in the management and development of various high street brands and startup companies.

He will work alongside Jon Cullen, global chief development officer, and Nigel Belton, managing director for GDK USA, as he develops the GDK brand across the U.S. and Canada. 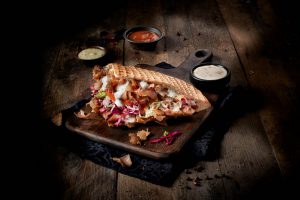 German Doner Kebab opened its first U.S. location at the American Dream Mall in New Jersey in August 2021. Its 2022 development pipeline includes key locations in the U.S.: Manhattan, Brooklyn, Queens, New Jersey, Houston and Dallas, along with Canada. GDK plans to open 100 new restaurants in Canada over the next 10 years following the success of its sites in Surrey, Ottawa and downtown Toronto.

German Doner Kebab is a fast-casual brand that has created a premium, high quality, approach to traditional kebabs. GDK is one of the fastest-growing brands in the UK, opening 39 new restaurants in 2021 and plans to open 78 new restaurants this year. GDK opened its first restaurant in Berlin in 1989 and spent the next decade developing its products and recipes.

Based in Glasgow, Scotland, the brand has grown at great pace in the UK, Europe and the Middle East and is now rapidly expanding in the U.S., Canada, Saudi Arabia and Ireland. For more information, visit: https://www.germandonerkebab.com.